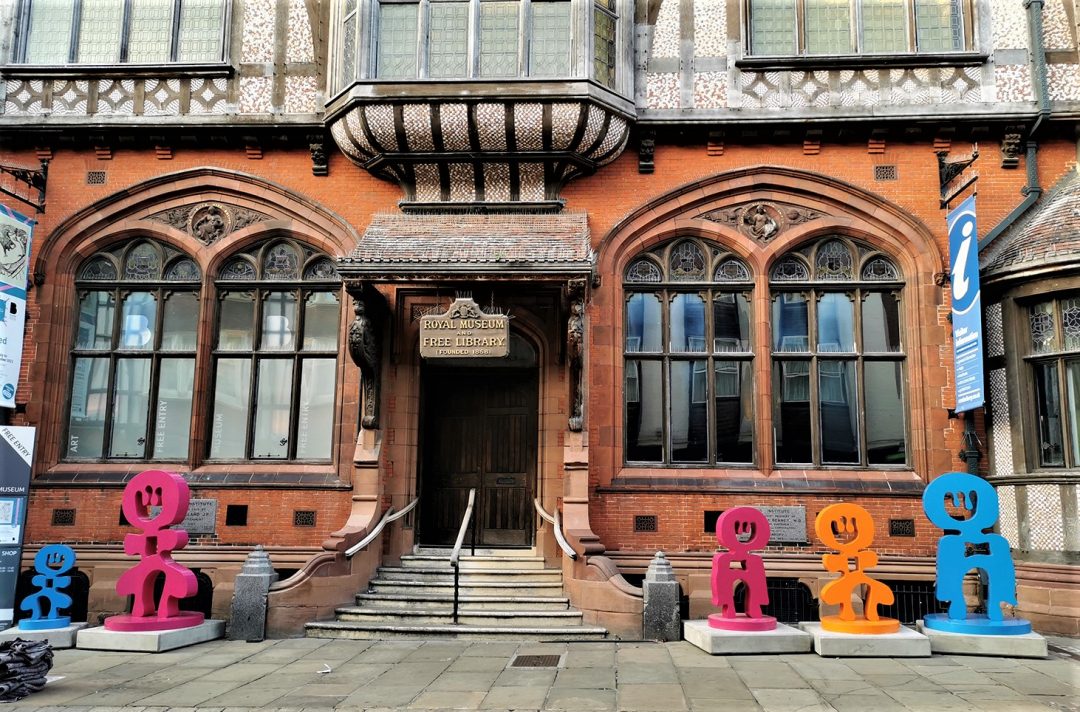 Canterbury BID is delighted to have sponsored an eye catching new sculpture for the city centre outside The Beaney House of Art and Knowledge, but until now we were unable able to reveal the reason it is there…

The multi-coloured humanoid figures, made from laser cut steel ranging from 76cm to 170cm tall, appeared outside the city’s museum and gallery earlier this month but their arrival was shrouded in secrecy.

This week it was revealed the artwork is entitled Peeps 2021 by London-based artist Alice Irwin,who is vying to create the UK’s new national landmark as part of Sky Art’s Landmark television series.

Airing from Monday 6 September, the show sees artists from across the country compete across six heats. The episode featuring Canterbury will air on Monday 13 September and the overall winner will be revealed on Monday 18 October.

“We are so pleased The Beaney was chosen to host one of the show’s competition entries. It is a real recognition of the role the district plays in the county and country’s cultural life, contemporary or otherwise, while acknowledging its amazing history and heritage.

“We hope Alice’s work puts us in the national spotlight once again and gives people yet another reason to visit as we all get back on our feet after the pandemic.

“Special thanks has to go to the Canterbury BID and Arts Council England who have supported the project via The Beaney’s creative programme.”

We are absolutely delighted that Canterbury is part of this exciting Sky Arts series, and that our piece will form part of a national art trail. The arrival of ‘Peeps 2021’ is a great way to show that Canterbury is looking to the future and finding new ways to welcome and engage with people. We want to encourage more visitors to the city with fresh reasons to explore. Artwork like this attracts footfall and we feel the vibrancy it brings is a great addition at a time when we need to support the recovery of our city.

The Peeps figures are part of a larger series of work relating to ‘play, childhood and our sub-conscious interaction with open-humanlike figures’.

Broadcaster, DJ and author Gemma Cairney will present the seven-part series which will air on Sky Arts, Freeview channel 11 and streaming service NOW.

At the end of each heat, the landmarks will be unveiled to the community which will join the judges to deliberate on which piece best sums up their area.

The winning artist will gain a coveted place in the final where they will pitch for a national landmark which one of them will be commissioned to create.The final landmark will be on display in Coventry, UK City of Culture for 2021.

To mark the launch of the series, research undertaken by Sky Arts into the UK’s favourite pieces of free-to-view outdoor artwork found three quarters of UK adults think famous outdoor artwork is a great way to put a place on the map.

Sky Arts is investing £700,000 in public art over the course of the programme with £250,000 dedicated to the final piece to cover materials, artist fees and maintaining the regional and national landmarks for years to come.

Plan your visit to The Beaney HERE.

Help your business save money on travel costs