We had a wonderful time hosting Canterbury’s second Christmas Window Competition, and the judges had so much fun soaking up the festive atmosphere. Judging took place on Saturday 3rd December with a panel of 5 judges. The windows were judged on three criteria: Festivity, Creativity/Originality and Merchandising; and each one was measured against a set standard and awarded Gold, Silver Gilt or Silver against that. See the results below! 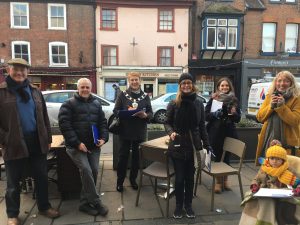 There was also a “People’s Choice” award via social media for small, independents. The first part of this ran from Saturday 3rd to Saturday 11th December. All small, independent businesses were offered a window poster inviting the public to vote by taking a photo of their window and posting it to Twitter, Instagram or Facebook using the hashtag #CanterburyChristmas.

The second part of People’s Choice ran from 16-19 December. All the photos we have for windows from independent businesses are on a MyCanterbury Facebook Album. The general public were invited to like and share their favourite photo. Anyone who liked and/or shared was entered into a prize draw. The idea was to raise more awareness of Canterbury’s independents and encourage more customers to take a closer look.

You can browse a selection of photos on our Flickr Album and read Rachel Phipp’s Blog here.

The city looks amazing with all the festive lights and windows. Keep snapping and sharing! #CanterburyChristmas